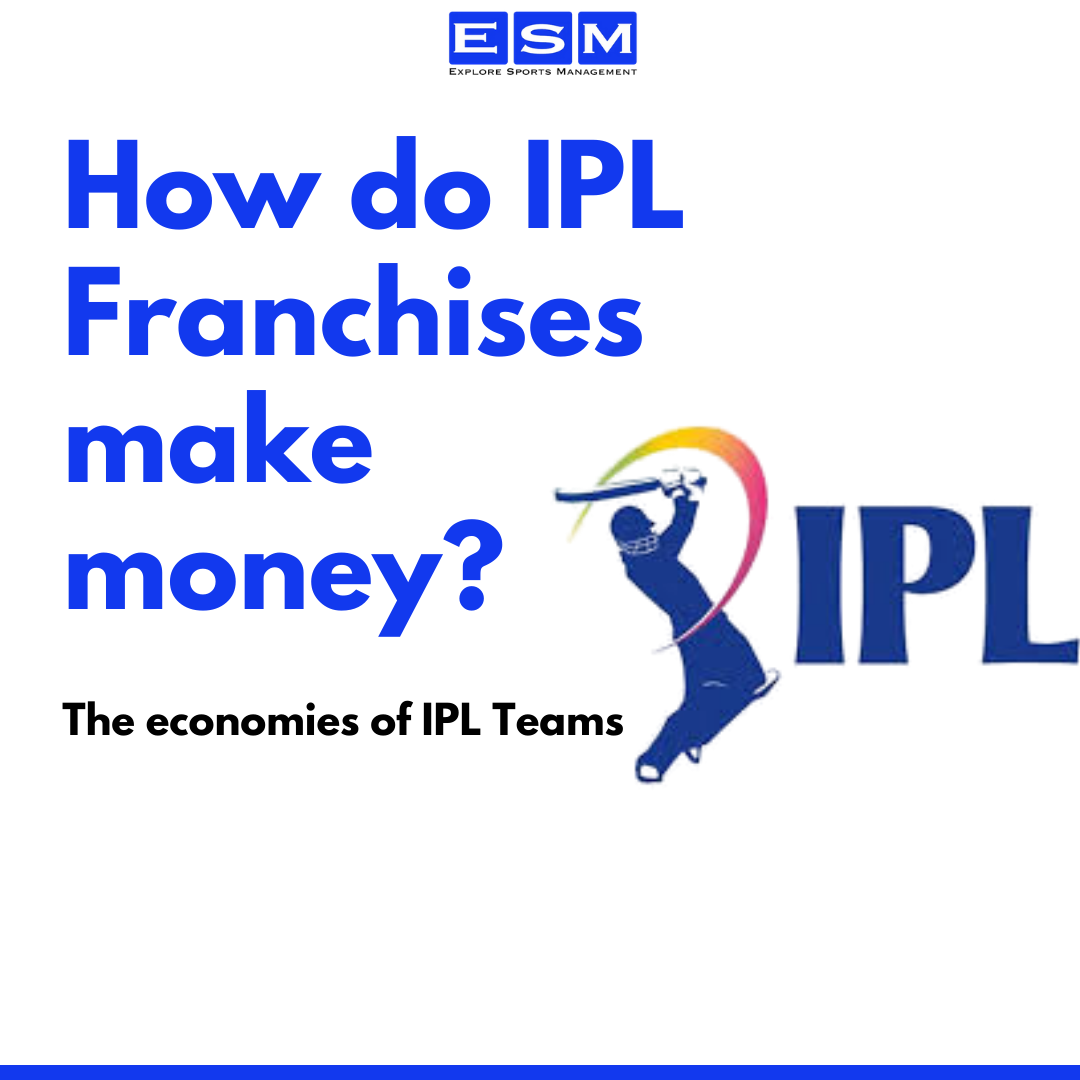 You might have read in the news that the Indian Premier League is the cash cow of the BCCI. You might also wonder how can the franchises pay such a big sum of money to the players? How does the IPL Team make money?

Today, Explore Sports Management takes you through a short article on How IPL Team Makes Money. Let this article be your source of a general idea about revenue sources for IPL franchises.

IPL makes from selling the title sponsorship, broadcast rights and from various official sponsors. From all the revenue generated, BCCI keeps 50% of the revenue and distributes the remaining 50% equally among all the franchises.

Now, let’s do some math here:

Star India acquired IPL media rights against 16,347 crore INR for a period of five years (2018 – 2022), which is 3,269 crore INR per season. After deducting their share, BCCI distributes the remaining amount to the franchises which is in excess of 200cr per franchise.

If we consider the money from the title and other official sponsors, the amount will increase significantly.

In short, earning from the central pool is the major source of revenue for the IPL teams.

Brand sponsorship also forms a critical aspect of revenue generation for the teams. Companies invest in the franchises to promote their products or brands by acquiring space on the team jersey and through marketing campaigns in association with the team.

For example, The Muthoot Group is the principal sponsor for CSK, Mumbai Indians have got Samsung, Delhi Capitals have JSW, SRH has JK Lakshmi Cements, etc.

There are various types of sponsorships which include the likes of apparel and kit sponsor, associate partner, beverage partner etc.

Brands offer money to the teams and in return for marketing activations on various platforms including – teams jersey, kit, social channels, etc.

Revenue generated from the sales of tickets is shared between team and association which ground is associated with. Each team hosts a total of 7 games in the league stage at their home ground. The prices may vary depending upon the fixture.

Winners, runners- up and the 3rd and 4th placed teams are awarded the prize money. In the 2020 season, the winner Mumbai Indians received 20 crore INR while the runner-ups Delhi Capitals got the amount of 12.5 crore INR. Sunrisers Hyderabad and Royal Challengers Bangalore received approximately 6.5cr according to a source.

These are the various ways in which IPL team makes money. The revenue for the teams will only increase in the future as more and more brands are looking to get associated with the glamorous Indian Premier League.