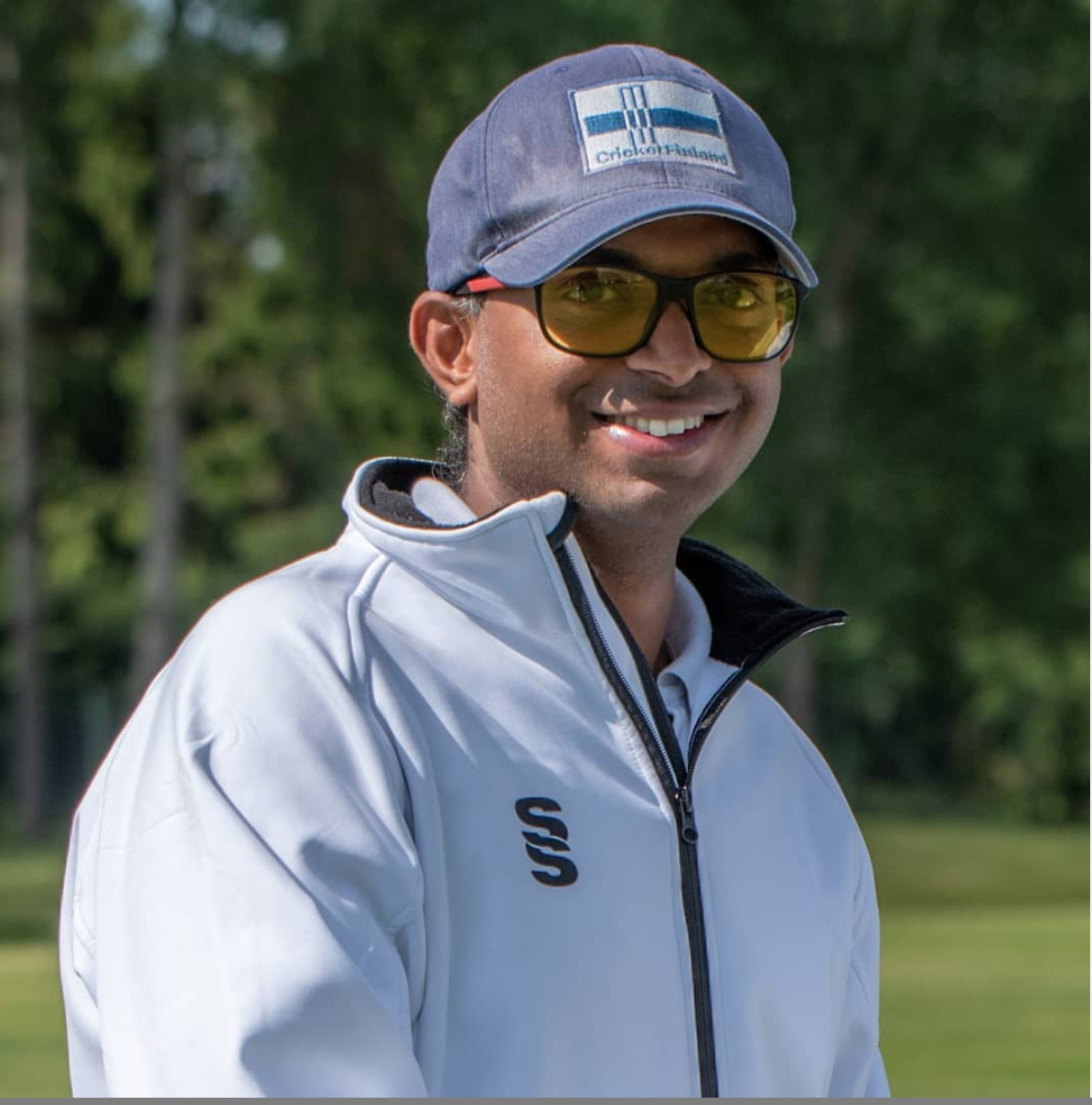 Explore Sports Management had an opportunity to catch up with Mr Sriharsha Kuchimanchi and discuss how one can become a cricket umpire.

He has had experience umpiring in Finland, Denmark, South Africa and India. He is the first Indian to be nominated as Head Umpire in Cricket Finland. The project was to train and develop local umpiring talent and be self-sustainable. So far, he has trained 20 umpires across various corners of the world and is mentoring them for a career in Umpiring.

Q1. What are the prerequisites to become a cricket umpire?

Foremost thing is to have passion towards the game of cricket. Other qualities like Integrity, Patience, Confidence, Impartiality, Tolerance, Courage. Umpires must have very thick skin and must accept criticism coming their way.

They must be in a position to filter out the criticism as and when needed. Umpires have to primarily focus on mental toughness without pushing away the physical toughness which is equally important.

Excellent man-management skills are also expected from Umpires, but this will improve as one gets exposure to all kinds of cricketing culture. Umpires will have to write a basic cricket law exam which changes from state to state. Training for the same will be given by respective state associations every year. This will be the first step to become an umpire.

Q2. Can you tell our readers about the responsibilities of cricket umpires both on and off the field?

The umpires have to control the match with absolute impartiality. During the game, the umpires shall be sole judges of fair and unfair play. They will intervene in all cases of unfair play and act upon it as and when needed.

If any of the rules are violated, umpires will act. Few examples are wide balls, no balls, appeals for dismissals, ball checks etc.  Before the game, the umpires will have to be in contact with Groundsman, Scorers, tournament managers, Match referees and ensure there is a smooth matchday experience for players, fans and all other stakeholders of the game.

After the game, the umpires will rate the pitch and venue facilities so as to provide feedback for the next games. Umpires will also be assessed by captains and match referees based on their overall performance. Remember, umpires get the best seat in the game of cricket!

Q3. How is the training of umpires conducted?

Every Umpire must be very fluent with laws of cricket. There are 42 laws for the game of cricket. Training will be given to all umpires on these laws and their interpretations. The umpires will be shown several video examples of interesting scenarios and will be asked to respond to such situations. Training starts from the local association level in the place of their domicile.

Each country has its own career pathway. In the case of India, state associations recruit umpires every year for their local club games. Recruitment involves writing a basic cricket law exam. After successfully passing the exam, the states assign games to the candidates.

After 1-2 years of umpiring in local state and district games, One will be eligible for the BCCI national exam. BCCI exam is conducted every 2 years. BCCI conducts a national level exam to which state associations will nominate their best available candidates.

The candidates will write a Level 1 BCCI exam which has a cut off mark of 90%. After clearing the level 1 exam, there is a level 2 exam conducted at a common centre in India. Training for this exam will be provided by BCCI days prior to the exam.

Clearing Level 2 exam with a determined cutoff will take you to the next level of scrutiny. This involves Viva voice and practicals. There will be a health test also conducted. Successful candidates who complete all levels will be inducted into the BCCI umpiring panel board.

Q4. How does one climb up the ladder as an Umpire? (From domestic to international level)

State-level panel umpire is the first step. After completing a simple cricket law exam, Umpires will be assessed by local and BCCI umpires from time to time in their respective state boards. These assessments vary from state to state.

Once candidates clear BCCI exams, candidates will be inducted into the BCCI board. BCCI also uses assessments by captains and Match referees every season. After consistently performing in BCCI level games, BCCI will nominate potential names to ICC. ICC will review all the incoming names from full nation members and place such umpires to ICC Elite panel umpires.

Q5. Could you share some exciting experiences you have had as an umpire?

In one of my games in South Africa, the pitch was lit on fire to remove some overnight moisture. This is something that I never experienced before and I got educated that it is one of the ways for better Turf management.

My first international ICC game in Denmark, where I was partnered by Mr Jesper Jensen, was quite memorable. I still remember all the decisions I made on that particular day.  I was very happy with my performance.

Q6. Is it a lucrative career option? What would be your message to youngsters who aspire to become cricket umpire?

Rather than seeing it as a lucrative option, one must look at it as an option to be involved in the game and being at the best seat to observe the proceedings of the game.

The monetary benefits to start with will be very few. From a financial point of view, one must engage in primary jobs/day jobs and keep umpiring as an evening or secondary job. One is expected to be very patient in this career. By becoming an umpire, you will be close to sportspersons who have different perspectives towards the way of life.

You will have experience managing various kinds of personalities from different cultures. Umpiring will certainly make a person more matured and bring a holistic development towards life.

We thank Mr Sriharsha for his time. It was a pleasure to have this discussion with you.

We hope you gained a lot of insight about umpiring in cricket through this article and an insight into how to become a cricket umpire.