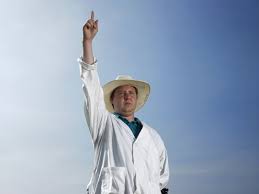 Cricket Australia announced a partnership with deodorant brand Rexona for the 2020-21 season of the Big Bash League. “Pit-vertising, as it is being called, has been buzzing around.

Umpires would sport logos of the Unilever brand on their armpits – a first in cricket sponsorship. The idea being the umpires raising their hands to signal a six or similar notifications where the arms are raised, showcasing the brand’s logo flashing prominently on TV screens.

The umpires have been carrying logos of brands in cricket leagues across the world but sporting a logo underneath the armpit is definitely the first of its kind.

CA said in a press release Rexona had “aligned with the BBL’s umpiring fraternity to protect them from countless hours spent in the summer heat”, although it is unclear whether umpires can be forced to wear the product themselves.

Twenty20 cricket is no stranger to innovation, in the game itself or the environment in which it is played, and the use of armpits for product placement is believed to be a world’s first in sport/cricket.

Rexona, whose parent company is Unilever, says it has begun the process of trademarking “pit-vertising” as it seeks to find fresh space in a format of the game already awash with branding.

Also read: A look back at Under Armour’s Rule Yourself ad campaign

Cricket Australia‘s head of commercial development Nick Thodey said “We are constantly on the lookout for brands that want to innovate and do things differently. We don’t believe this has been done anywhere in the world, and there has been a strong collabor­ative effort with the broadcasters as well. There will be a Rexona logo just under the underarm, and there will be an integration with the broadcast as well that the cameras will focus on the logo during the play”

The deal is the latest in a string of commercial partnerships either renewed or acquired by Cricket Australia this year. The organization will generate a record $70m in sponsorship this summer, despite the financial difficulties presented by the coronavirus pandemic.

Sports industry needs more of such creative sports marketers who can come up with such innovative marketing ideas. If you wish to become one, check this out.

Let us know down in the comments about more of such sports marketing adverts you found interesting.