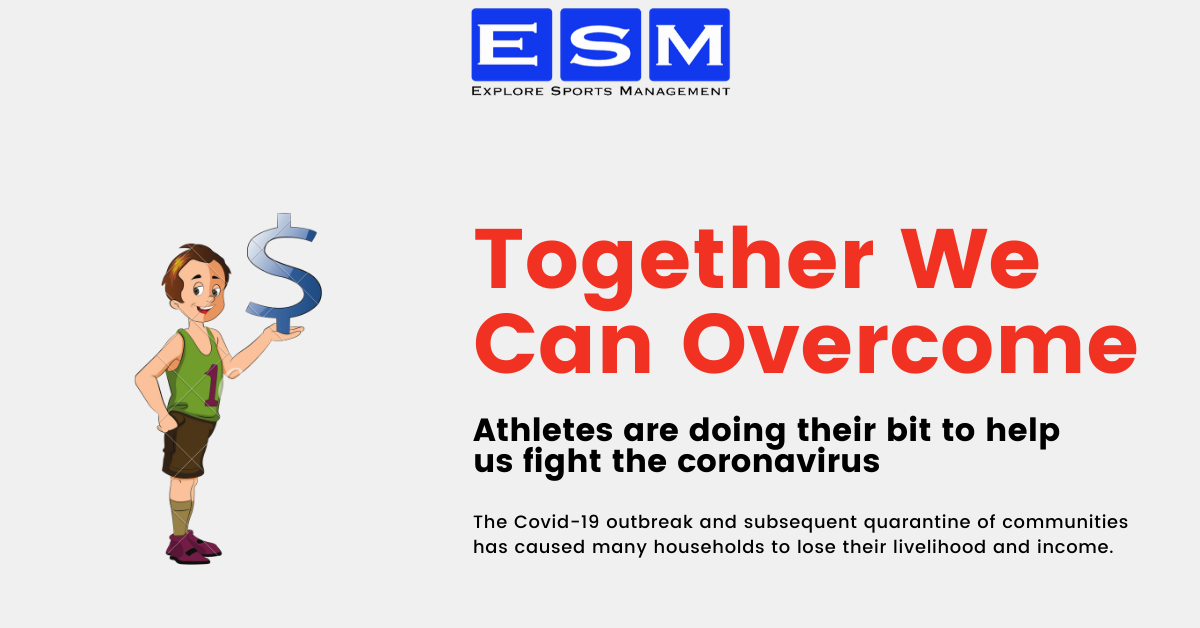 With Sports events being cancelled or postponed, clubs and leagues facing financial difficulties, players in quarantine, empty stadiums, thousands of lives being lost around the globe, the world indeed has entered a dark phase.

We all can agree that we miss watching our favourite sports stars action on the field. The thrilling nail-biting finishes of a cricket match, the celebratory beer clashes when our club wins, the watch-party of the match at a friends place with pizza and drinks, the endless discussions about each and every detail of a match, the heated banter between rival team’s fans, the excitement of a derby or a Classico, the synchronized chanting of club anthem by 80,000 people, the long waits in line to get into the stadium, the stadium atmosphere, the cheering of goals, sixes, wickets, smashes!

The global impact of the virus has either cancelled or postponed all sports events happening in the next quarter of the year. This entails huge setbacks in the economics of the sports industry. However, many athletes with deep pockets have risen up to the occasion and have made contributions to fight against the novel coronavirus.

“If the virus doesn’t go, Zlatan goes to the virus,” said the 38-year-old Swedish footballer in launch video of an online 1 million euros fundraiser campaign to ‘kick the coronavirus away’. The money raised will be directly donated Humanitas in Italy to help provide for hospitals and intensive care units. In the campaign video he further says “Italy has given me so much and in this dramatic moment, I want to give back even more to this country.” With more than 150000 coronavirus cases, Italy is the most affected country in Europe.

One of all-time greats of Tennis, The 20-time Grand Slam champion and his wife Mirka donated one million Swiss francs ($1.02 million, 943,000 euros for the most vulnerable families in Switzerland. He took on social media to share his message “These are most challenging times for everyone and nobody should be left behind. We hope that others might join in supporting more families in need. Together we can overcome this crisis! Stay healthy!”

They established a new emergency fund open for donations to assist all those families in need with food & child care services.

He also started a trend #tennisathome which showed a video of him playing tennis at home as a way to promote social distancing and encourage people to stay at home during this tough time. The video quickly went viral all over the world and saw numerous people including celebrities participating in this trend.

Also read: Indian athletes who have contributed to fight against coronavirus

Known for his true sportsmanship on and off the field, the modern era football legend Cristian Ronaldo and his agent Jorge Mende are said to have donated 1.8 million euros to hospitals in Portugal. Portugal has reported close to 16000 positive COVID-19 cases and more than 450 deaths as of now.

Cristiano Ronaldo is the most followed person on social media (330m+) and he has taken active measures to spread awareness about the virus, it’s prevention and practice of social distancing to all followers.

Argentina football great and 6 times Ballon D’or winner Lionel Messi has donated one million euros to a hospital in Barcelona to help combat the ongoing coronavirus pandemic. Messi is one of the highest-paid athletes in the world. He along with his teammates at Barcelona FC have agreed to a salary pay cut amid the financial crunch of the club and also volunteered to ensure that all staff members of the club are paid 100% of their salaries.

Messi’s former Barcelona manager Pep Guardiola (current Manchester City manager) has also donated one million euros towards the purchase and production of medical supplies and equipment with another Barcelona-based campaign.

The Spanish tennis great issued a rally to raise 11 million euros to help fight coronavirus pandemic. He urged all Spanish athletes to contribute to the cause in his video posted on social media. Spain is one of the most badly affected countries in Europe with more than 160000 cases and 16000 deaths!

“We reached the conclusion that now is the time to launch an initiative which we hope that all Spanish sports come together in a show of solidarity and a good example of unity to align ourselves with the Red Cross Response.”

The current world’s best in Tennis has given 1 million euro for ventilators and medical equipment required in hospitals in Serbia, his native land.

“The fight is not easy, but I am convinced that we will manage to make it out of this stronger than before. It’s important to remain united in this fight, to help each other, so we can defeat this virus faster and easier.” Said Novak to the media on video conference.

The Irish Mixed Martial Artist and UFA star pledged to buy 1 million euro worth of protective equipment and distribute in Irish hospitals. He directly addressed his message to Paschal Donohue, the Irish Minister for Finance. Over 50000 PPE masks were rolled out to the hospitals due to his efforts.

In the USA, many NBA players haven taken upon themselves to provide for the needy with food and supplies in their local community and also to arena workers.

Milwaukee Bucks superstar Giannis Antetokounmpo and Cavaliers player Kevin Love each donated $100 million to a foundation that is helping the people affected by this pandemic. The Golden State Warriors and New Orleans Pelicans revealed that they will each donate one million dollars.

Many more have joined the fight against Coronavirus

Over 100 athletes from as much as 20 different sports have donated signed memorabilia that will be auctioned by the ‘Athletes for COVID-19 Relief’ fund. The amount raised from the auction proceeds will go to the Center for Disaster Philanthropy’s COVID-19 Response Fund.

There are many athletes not named here who have donated money or helped their community in some way or the other either by providing a place for isolation wards, giving food, supplies, spreading awareness online etc.

We applaud contribution from each and everyone helping in any way possible. It all makes a difference!

The world fights this pandemic together and the sports industry is doing what they can help with awareness and containment of this virus. Our hope is that we come out of this stronger and better.