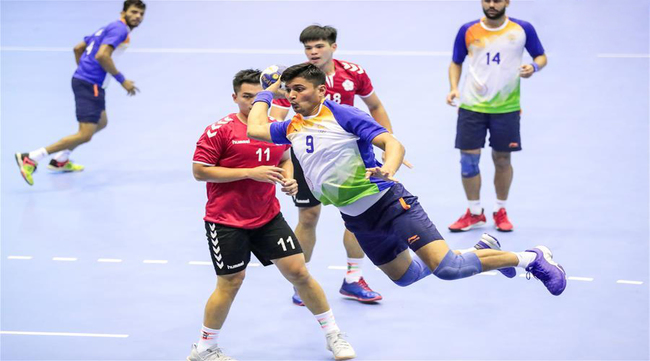 Premier Handball League (PHL), is a professional men’s handball league in India.
The league is an initiative between the Handball Federation of India and Sportz & Live Entertainment Private Limited, which also holds the long-term rights for Badminton, Boxing and Cue leagues.

The league was earlier scheduled to be held at the Sawai Mansingh Indoor Stadium in Jaipur from 24 December 2020 to 10 January 2021. But due to concerns over health and safety of players amid the COVID-19 pandemic the league got postponed.
The new dates are yet to be announced.

Six teams – Telangana Tigers, UP Icons, Maharashtra Handball Hustlers, KingHawks Rajasthan, Bengal Blues and Punjab Pitbulls – are slated to take part in the inaugural season of the league with participation of more than 80 athletes with each team consisting 14 players.

“Players safety is of paramount importance to us,” Handball Federation of India (HFI) Vice President Anandeshwar Pandey said in a media release.

“We wanted to conduct the inaugural season as per announced schedule but the current situation has not been allowing us to get everything in place keeping the safety guidelines intact,” he added.

“Any lapses would put the health of our players and others involved in danger which we would never wish to happen. Hence, we had to take the difficult decision to postpone the league dates to the early part of the next year with hope that the situation will improve by then,” he further added.

Keeping in mind the challenges of the ongoing COVID-19 pandemic, the event will now be played without spectators and foreign players in a secured bio-bubble, with a seven-day mandatory quarantine ahead of the league.

“Our entire team has been working hard to create a secure bubble ahead of the league. But with the involvement of more than 350 individuals, it’s difficult to create the desired environment and execute the safety plans in such a short span of time,” PHL CEO, Mrinalini Sharma said.

“With the league dates being rescheduled, we will have more time to put things in place and create the best and safest environment for our players and other stakeholders involved,” Sharma added.

With the arrival of the Premier Handball League, India is set to witness handball revolution in the country as the league focuses on to boost the chances of this Olympic sport and the exposure to its athletes with a platform to showcase their talent.